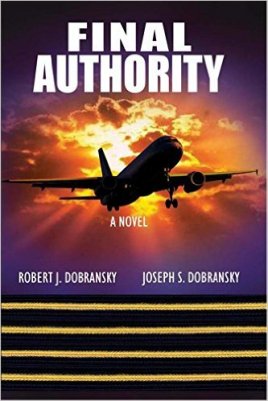 This is one of those airline mysteries that is filled with authentic details. You’ll feel like you boarded a flight and can’t get off until you’ve landed at your destination.

Written by two brothers who fly for competing airlines, their experience with the large complicated industry is revealed in their realistic look at fictitious Global Alliance Airline and several of the key people who run it.

I would have given this book a five star rating instead of four except for a couple of issues.

The authors would bring the story to a stop to go into a lengthy tale of a character’s backstory, when I feel this could have been layered in throughout the novel, or left out. I also felt the authors overly dramatized several of the characters who weren’t pilots. A couple I questioned how they rose to their lofty position within the airline, an issue many pilots have with their airline’s management, but in this case it came across as exaggerated. Lastly, I questioned the need of the prologue. It showed the trouble the protagonist Captain Bruce Bannock faced at some point in the novel, yet it wasn’t until the very end of the novel its purpose was revealed. I read the majority of the book questioning what the prologue had to do with the story.

That aside, the authors did an excellent job showing the lengths some within an airlines hierarchy will do to seek power and wealth. Offsetting this group were some qualified, hard-working individuals who did the real work at keeping the airline operating while it faced the crisis portrayed. The authors showed this latter group realistically.

And, extremely important to this reviewer, the flying details were exacting. Readers interested in an airline mystery that could potentially happen will enjoy this book.

I look forward to reading more from these authors.

3 thoughts on “Final Authority, by Robert Dobransky and Joesph Dobransky”